Steve McQueen: For Queen and Country

98 framed sheets of facsimile stamps are housed in a wooden cabinet. Now in the collection of the Imperial War Museum, London.

Hollis described his involvement to an American journalist in this way: “Steve McQueen was brought to see me early last summer (2006). He wanted to make large books of postage stamps, each sheet reproducing individually the portrait heads of the 100 or so British soldiers who’d died in Iraq. I suggested he should not have books but put the sheets in display cases (vertical drawers, frames in a cabinet, like the way the King’s stamps were shown in the British Museum, now in the British Library). He went with this idea. Architect friends of mine then volunteered to sort out how the cabinet and its slides could be constructed. They had made (gratis) a full-size mock-up in the actual materials, all in pine stained black but rubbed down to a grained, dark grey sheen. This was set up in their mews garage and they made a small film to show its scale. It was intended that the white paper of the sheets of “stamps” and the grid between the rows of stamps should be the most dramatic presentation of the faces in a setting which was otherwise sombre.This effect was lost in the final work, where the frames and structure are finished in waxed light oak. It seemed to me that the non-reflective Perspex (plexiglass) which had been chosen to protect the stamps should be turned wrong side round: at eye level the viewer’s reflection might increase their engagement, face to face with the multiple image.

I scanned all the photographs sent in by next of kin in response to the researcher on the project, Joanne Priest. There were 98 out of 120 dead British servicemen at the time. Most of the photographs needed some photoshopping: in several cases this was to remove, for example, a girl friend’s hand on a shoulder. Some were wedding shots, many were photographs with mates, even with their children on holiday. On the back of one image, “Please return to Mum”. These scans were then put into sheets of facsimile stamps, about 150 percent larger than conventional postage stamps and with “perforations” (which were not punched through but printed as black dots. These sheets of 168 stamps (12 across and 14 down) were assembled in InDesign by Thorbjørn Ankerstjerne, a Danish student-designer.” 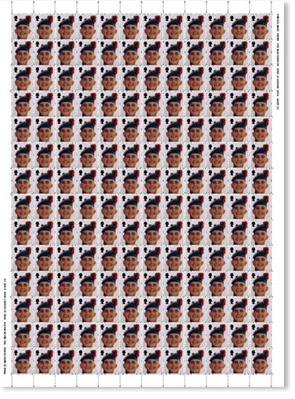 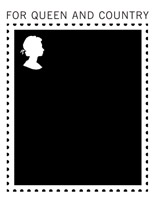 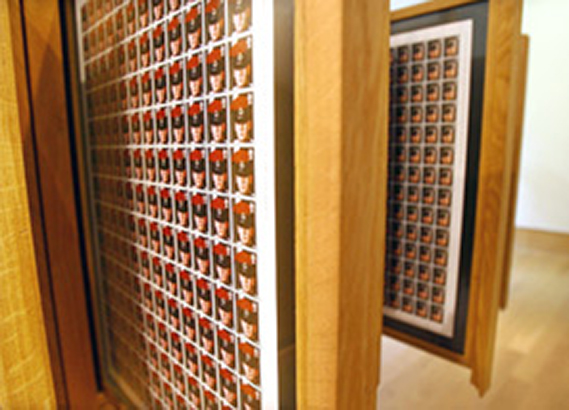